American Alsatians were first bred to create a family friendly dog breed that looks like a dire wolf. The dire wolf is an ancient North American wolf species that became extinct around 13,000 years ago.

This dog has all the benefits of looking like a dire wolf, but it is calm and gentle enough to be a great pet. They are an intelligent, loving and gentle family dog.

Powerful and stoic are a few of the many endearing terms that come to mind when you first see an American Alsatian.

If you want to learn more about this breed then keep reading. We discuss their history, breed standard, adoption, training and care. We also share how they are different from Alsatians and German Shepherds. 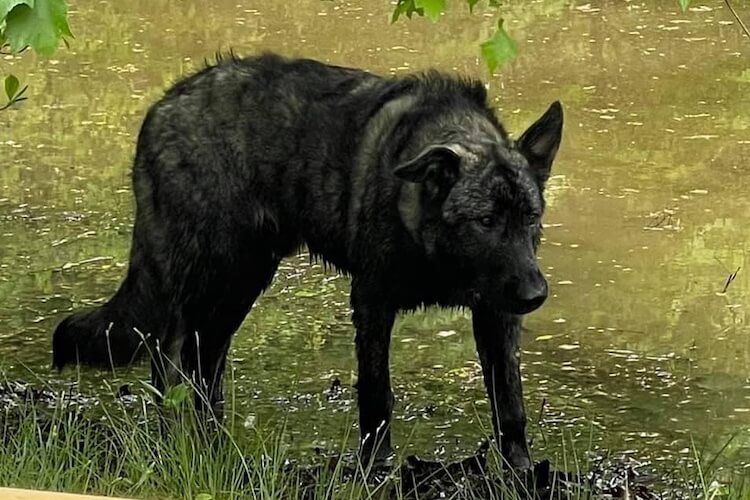 The American Alsatian is a modern dog breed that was first bred in 1987 by Lois Schwarz. Lois Denny-Schwarz started breeding American Alsatians because she wanted a dog with the appearance of a wolf, but the temperament of a domesticated family dog. Her goal was to create a dog breed that looks like an imaginary wolf, but has the calm and gentle temperament of a family dog.

American Alsatians were originally created by breeding the Alaskan Malamute to the German Shepherd. However, to improve the appearance and temperament of the breed, Lois also bred other breeds into the bloodline. As far as we know, she used the English Mastiff, Great Pyrenees, Anatolian Shepherd, Labrador, Akita and Irish Wolfhound.

Even with this wide range of breeds, only dogs with very specific personality traits were selected for the breeding program. Personality traits that Lois looked for included intuitiveness, intelligence, aloofness, and and not shy.

The goal was to create a dog that was not highly affectionate but loyal.

She wanted a scary looking dog, that was not aggressive, but would scare would be robbers and thieves and keep owners safe.

Personality was not the only characteristic that Lois bred for, health was also important.

The American Alsatian breeding association tests each dog before allowing them to contribute to the breeding program. They also outcross their dogs to create a wider gene pool and to maintain good health in the breed. Outcrossing is the process of breeding two dogs to one another that are completely unrelated.

This breed may look like a wolf dog mix but it has absolutely no wolf in the bloodlines. The original breeder of the American Alsatian states they are a companion dog and not a working breed.

American Alsatians are such a unique breed that are not classified in any of the traditional kennel club categories (e.g. Toy, Hound, Working). The only classification that this breed has is companion dog.

The Dire Wolf Project was created by Lois Denny-Schwarz in 1988. This was one year after she bred her first American Alsatian. The project’s goal was to breed a dog with the bone structure of a dire wolf and the temperament of a domesticated dog.

Many wolf dog mixes are difficult to own due to being incredibly high energy and unpredictable. They also need lots of behavioral modification training as many are not domesticated. Lois wanted her American Alsatian’s to be easy to train, and this is true.

The Dire Wolf Project’ was a name her daughter Jennifer came up with.

Schwarz wanted to consistently breed a dog that had a similar appearance to a large extinct wolf, but one that did not have the temperament complications of a wild wolf. The ‘dire wolf project’ was then used to describe her dogs to the general public.

There are only two approved breeders currently participating in the project. Schwarz Kennels in White City Oregon and Dire Wolf Dogs Vallecito in Washington.

Not only is the Dire Wolf Project focusing on the temperament of the American Alsatian, but also the appearance. Breeders work diligently to replicate the bone structure and skull dimensions of the dire wolf. However, this is a slow process as temperament and health are the project’s first priority. 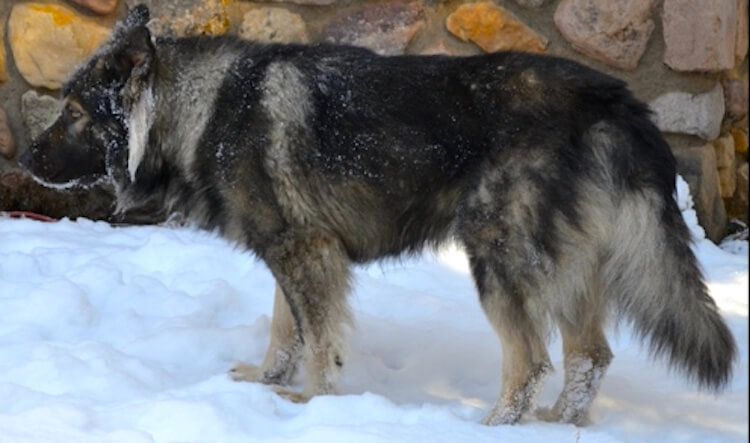 The American Alsatian is definitely not a small dog! They are a large, thick coated breed that has a close resemblance to the dire wolf.

Male American Alsatians stand between 26 and 32 inches tall with females standing between 25 and 28 inches. Their sturdy and muscular body will typically weigh between 90 and 110 pounds (males) and 85 to 105 pounds (females).

This dog is much larger than what most people would consider a typical large-sized breed. They are actually closer in size to a Saint Bernard or even a Great Dane.

They have thick double-coats that shed as the season changes. When winter starts to warm up and becomes spring, their coat will heavily shed.

This coat comes in a wide variety of colors, but the most popular is silver sable. This is most likely because silver sable looks closest to a wolf. The same is true for Silver Lab Retrievers too. Some of the other colors included in the breed standard are: solid cream or black and sable variations of gold, black/silver, and tri colored.

As the American Alsatian is a mixed breed dog, its appearance as an adult can be somewhat unpredictable, especially the earlier F1 and F2 generations. However, most will have a thick double coat that is darker in spring and a lighter color in the winter.

Their eyes are usually a brilliant shade of light amber to a golden-brown. This color stands out against their black nose, eyelids, and lips. Most will also have upright ears and a facial structure very similar to a wolf.

American Alsatians are extremely calm and loyal dogs. They can live well with everyone from small children, to seniors, and even other dogs. This breed is so calm that they can be left at home alone and are one of the few breeds that do not suffer from separation anxiety. They are extremely relaxed and rarely bark

They are also loyal. They are bred to be a companion breed, and not a working dog. This dog is a homebody and will rarely choose to wander too far away from home.

American Alsatians are great house dogs. One of their best temperament traits is that they are very good at mirroring the energy level of their family. This is a trait normally shown by Pitbull type dogs.

When you want to rest and relax your American Alsatian will also be calmly resting. However, the opposite is also true. When you want to go on an outdoor adventure they will excitedly be by your side. This breed has a huge amount of love for the outdoors. Playing or walking in a large forest for 60 minutes a day is going to be a must.

Training is a breeze with this big wolf-like dog. The American Alsatian is a low-maintenance dog that is easy to train for first time dog owners. They readily take commands from you and you can teach new dog tricks each week to this breed.

One of the most important parts of training this breed is socialization. The earlier you start socialization training, the better. When you bring your puppy home, make sure to introduce them to children, adults, places other than home, and other animals and dogs.

American Alsatians are very healthy for large dog breeds. On average they will live for between 9 and 13 years of age despite most larger dogs having shorter lifespan when compared to smaller breed dogs.

According to this registry the most common genetic diseases are hypothyroidism, epilepsy/seizures, Panosteitis, various cancers and birth defects.

Overall, the presence of genetic diseases and health issues is around 4.6%. Fifth generation mixes and beyond have exceptionally low rates of disease.

What Is An Alsatian?

It is said, the Alsatian part of their name was chosen to suggest that the breed originated from Alsace, which is a region of France, and not Germany. Both the German Shepherd and the Alsatian Wolf Dog are the same breed.

American Alsatians are not the same dog as Alsatians.

Since their first appearance in the 1980s, the American Alsatian has been known by three different names:

American Alsatians vs. German Shepherds: What Is The Difference? 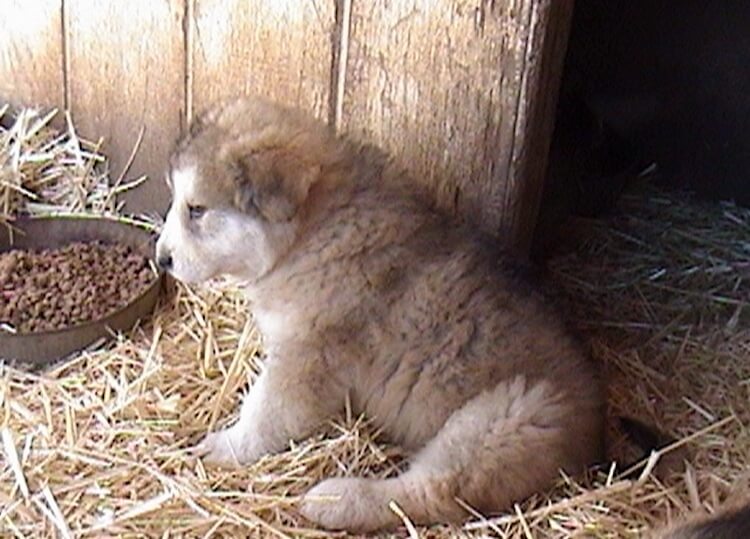 The most obvious difference between these two breeds is their size. American Alsatians are much bigger than German Shepherds. They are a giant-sized dog breed and are typically between 85 and 110 pounds, while a German Shepherd is between 50 and 100 pounds. Only a large German Shepherd can be anywhere close to this wolf-like dog.

Another difference between these two dogs is their coat. Because this mix has Malamute in them, their fur tends to be much longer and coarser. Both dog breeds have a dense doubled layered coat that are similar in color.

When it comes to temperament it becomes much easier to see differences between the two breeds:

There was no need for the American Alsatian to develop guarding tendencies as they were never intended to be working dogs. The breeders of the Dire Wolf project specifically chose clam and gentle dogs for outcrossing. They used dogs like the Great Pyrenees and American Labradors to remove the German Shepherd’s aggression and guarding tendencies.

The American Alsatian is a new dog breed that was bred to look like a dire wolf. Its giant size, large head, and thick silver coat make them look just like a wolf. Their wolf-like appearance may be striking, but they are a true companion dog with a gentle and calm personality.

Not only will an American Alsatian be loyal and faithful, they are also highly affectionate. These famous dogs are one of a kind and are sure to capture the attention of everyone who meets one.

Are you ready to have some extra-large paw prints marked on your heart? Share a comment with us area below.

Marvelous Dogs’ articles and breed profiles, videos and podcasts are intended to be used for a general nature only. It is not intended to constitute or replace professional and medical advice.