A Cockapoo is a cross between the charming Cocker Spaniel and proud Poodle.

Poodles and Cocker Spaniels have many coat colors, so there are over 15 Cockapoo colors.

Not all Cockapoos look the same since they are a crossbreed. A lot of the time their coat will be curly or wavy, but it can even be smooth if they get more Cocker Spaniel genes.

Popular coat colors include black, cream, apricot, red, golden and chocolate. But Cockapoos can be more than just one color. They can have two or more colors and even different patterns.

Keep on reading to discover 11 popular types of colors in the Cockapoo!

How Many Cockapoo Colors Are There? 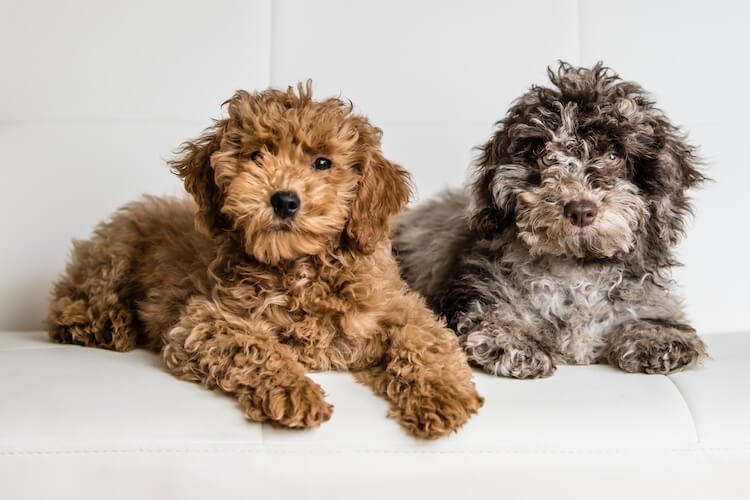 But because there are various types of patterned coats, the total number is much more than this.

The exact number of coat colors is not known because of the different kinds of tri-color Cockapoos, but there are at least over 11 different color variations. Some of the most popular colors are:

Apricot and golden are some of the most popular Cockapoo colors, but they can also be parti (white and one or more colors), tri-color (parti and tan markings), sable, merle and roan.

These hybrids have so many different colors and combinations because of their parents.

Poodles have 11 coat colors recognized by their breed standard, while the Cocker Spaniel has 15. Cockapoos can inherit all of their parents’ color types, but which color a puppy gets when it is born depends a lot on their genes.

If you cross a black Cocker Spaniel with an apricot Poodle, you will most likely get a puppy that is black. This is because the black gene is a dominant gene, while apricot is recessive. A puppy only needs to inherit one copy of the black gene to have a solid black coat.

The black Cocker Spaniel might have a recessive apricot gene that is masked by the black gene, so it can still have apricot Cockapoo puppies as long as it passes on that gene.

Golden Cockapoos are another coat color variety that is recessive. These beautiful yellow-shaded puppies need two copies of the yellow gene. Dominant genes like black will mask this color if the puppy inherits only one gene.

The golden color is actually on the same gene as colors like orange and red. They’re all considered “yellow” colors, just different shades.

While yellow colors are recessive, they are still pretty common because there are plenty of Poodles, Cocker Spaniels and Cockapoos that are yellow and can be crossed together. As long as both parents are red or yellow, then all the puppies will be that color. 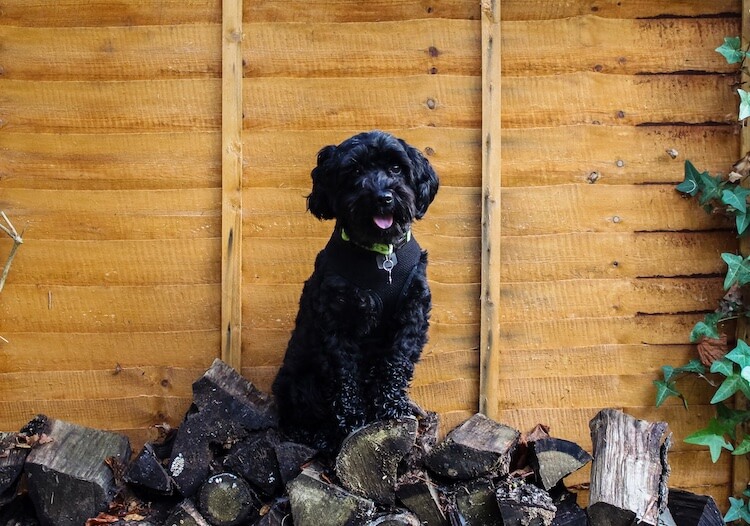 Solid black Cockapoos have a coat as dark as midnight. They have very dark eyes and black noses, which perfectly blend with the color of their coat. The only thing that might stand out from their fluffy black body is their white teeth and pink tongue when they have their mouth open. Some Black Cockapoos might also have white markings, usually a patch of white on their chest which makes it seem like they are wearing a tuxedo. Sometimes these dogs can also inherit a fading gene from the Poodle. This will make their coat fade over time from black into gray. How much it fades varies from puppy to puppy, but it can be from an ash gray to a slightly dilute black. 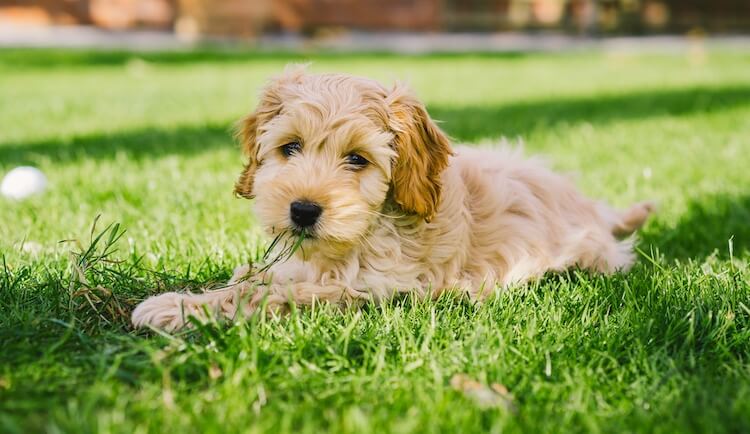 Golden Cockapoo puppies have coats that range from light brown-yellow (buff) to bright dark yellow (golden). These coats can be either solid yellow or have white patches on the chest. Like the white coat, they are one of the most popular Cockapoo colors as they look like cute little Golden Retrievers. But don’t get these breeds confused. Golden Cockapoos are not Golden Retrievers, nor are they golden Goldendoodles. Most of the time Cockapoos will be smaller than these breeds because miniature Golden Cockapoos are very common. They also have more of a square body type because of their Cocker Spaniel heritage. 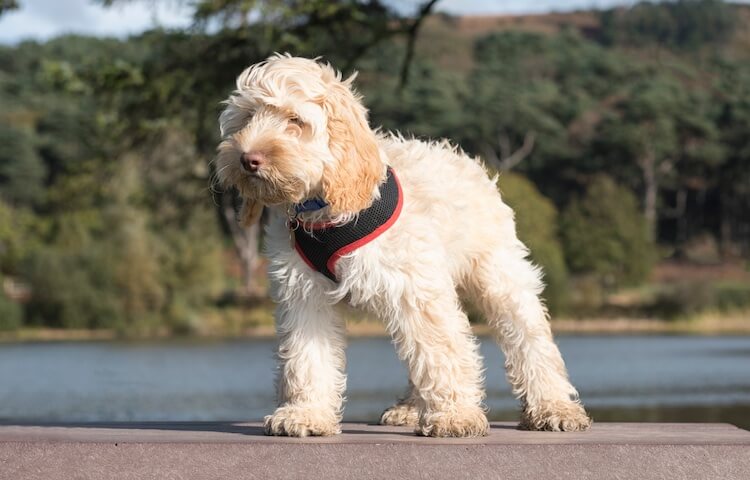 White Cockapoos are one of the most popular colors that owners choose. Solid white coats come from their Poodle side. These Cockapoos are usually curly haired and perfectly white without any other color. Sometimes their Cocker Spaniel genes can add a bit of gold or cream to the tips of their hairs, especially around the face and ears. When perfectly white, the only thing that pops out from their curly coat is their black eyes and noses. 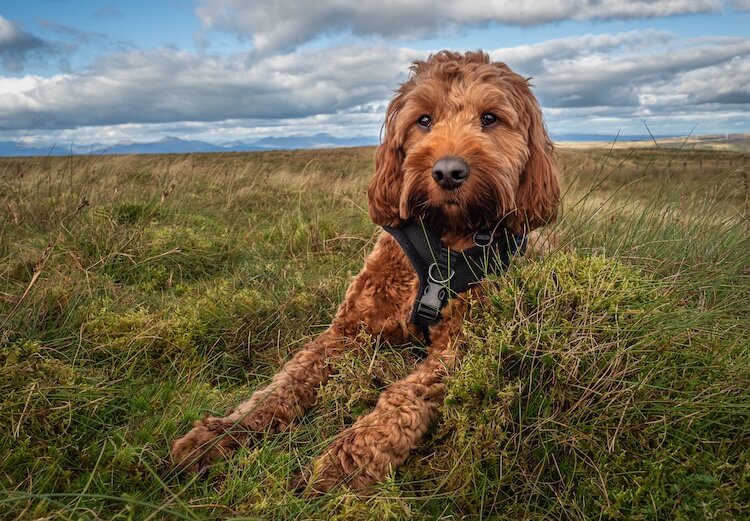 Red Cockapoos have coats that are brick red. Their eyes are brown and their nose varies from a dark black to a dark brown with a little bit of a red tinge. The red color is very intense and the gene can come from both the Poodle and Cocker Spaniel. Depending on the parent they take after you might see a variety of red Cockapoos ranging from straight haired or shaggy to wavy or curly. The curlier the hair, the less they shed. Many red Cockapoo puppies are bred to have curly coats and be hypoallergenic. 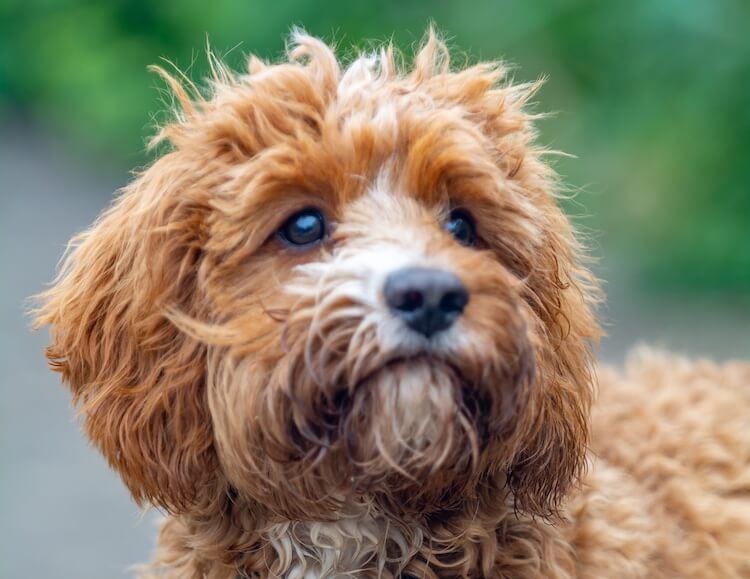 It can be easy to confuse apricot and red Cockapoos, but they are different Cockapoo colors! The apricot is a lighter shade of red, having a more orange tinge to it. Apricot is one of the most popular colors, but it only comes from the Poodle parent. So you might see more curly haired puppies with the apricot color, since the Poodle passes on the curly hair. Sometimes the Cocker Spaniel can donate patches of white to this bright orange coat to produce a coat that is not completely orange. Like the red Cockapoo, their eyes are brown and their noses can be black or brown with a tinge of red. 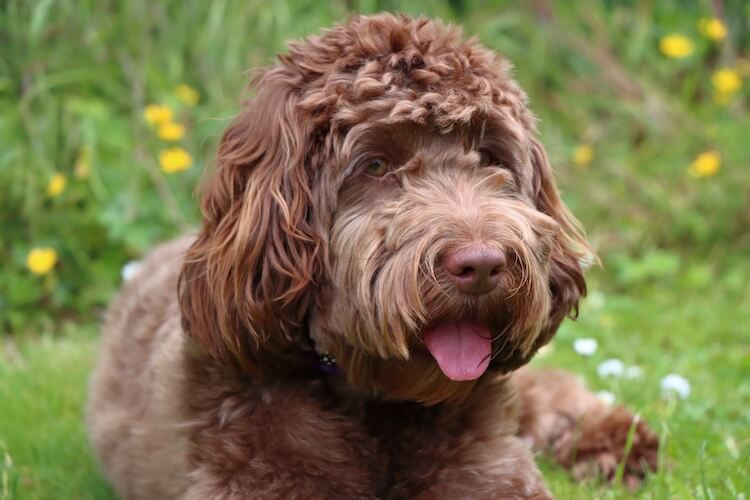 A chocolate Cockapoo is a gorgeous puppy with a coat that can range from caramel to dark brown. This coat can either be solid or have a white patch on the chest. Chocolate Cockapoos inherit light hazel or green eyes, instead of the brown eyes typical for most other types of Cockapoos. Their nose is also brown to match their coat. Chocolates are considered to be rare as they are a recessive variation of the black gene. These puppies get this dark brown color only when the genes they inherit are both brown recessive.

Merle is actually a coat pattern, instead of a color. The merle pattern comes from the Cocker Spaniel. Merle Cockapoos are the rarest and have a light white base coat that is littered with spots of a darker color. Every merle puppy is completely unique as their spot pattern is their own. These puppies are also quite different because they can have one blue eye and one brown eye. Merle Cockapoos are often controversial because the merle gene is associated with health problems such as blindness and deafness. When bred correctly, merle puppies tend to be healthy. Reputable breeders test their dogs to ensure that both parents do not pass on the merle gene so that you can have a healthy Cockapoo.

SIMILAR: All 30 Types of Dachshund Colors 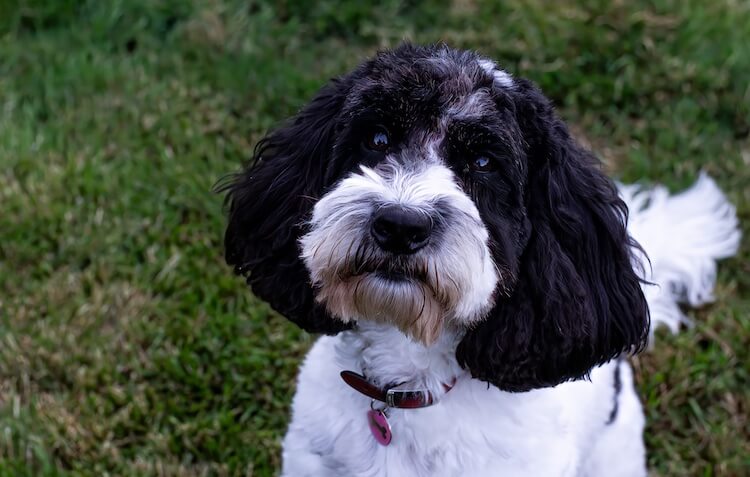 A Black and White Cockapoo is actually a type of parti Cockapoo. Parti is a color pattern made of two or more solid colors, one of which must be white. There are different kinds of parti Cockapoos, but black and white is one that you will often see. Usually the white hair covers the legs, chest and abdomen, while the black hair appears around the eyes, over the ears and on part of the back and tail. The large black patches occur at random over the white base coat so each parti Cockapoo is very unique. Their dark face mask is complemented with dark eyes and a black nose. You might think of these puppies as little bandits because of the way the black covers their face!

Roan is another Cockapoo pattern, and it has a dark base coat with many white patches mixed in. This dark base coat can be colors like black, blue or chocolate. It is easy to confuse roan with merle, but roan is more like the reverse of a merle. The dark color forms most of the base coat, instead of the white. Also unlike merle, they don’t look spotted because the base coat isn’t diluted. Eye and nose color will match their main coat color. For example, a chocolate roan will have hazel eyes and a liver colored nose. 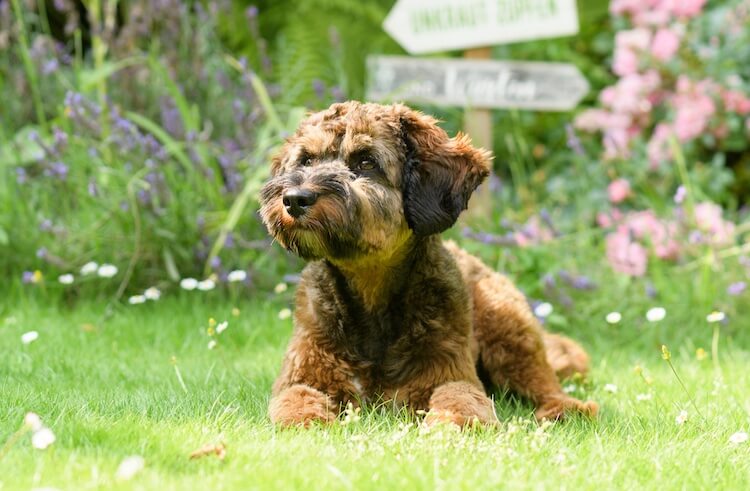 Sable puppies are very unique because they are born with a black or chocolate coat color that eventually lightens to a combination of gold, silver, red, brown and tan. The red and brown colors really stand out, while the lighter golden, silver and tan colors add a little bit of yellow. Their base color is usually over their legs, chest and abdomen, while on their head, ears and a bit of their back are darker black and chocolate shades. 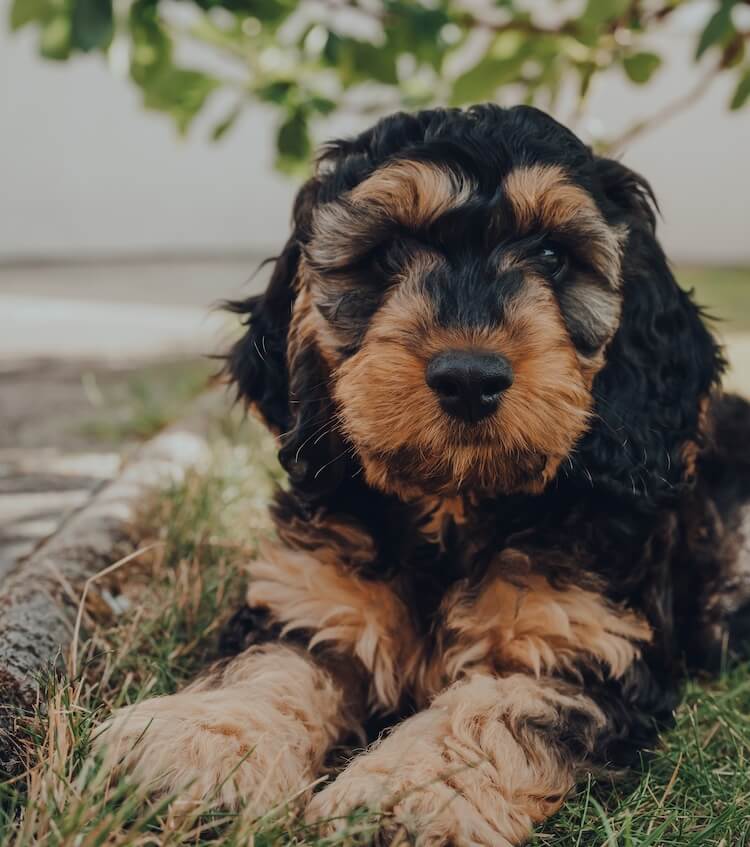 Phantom Cockapoos are black dogs with tan points. Phantom puppies have a black coat and patches of brown or tan on their legs, over the eyes, on the muzzle and under the tail. Just like black dogs they will have black eyes and a black nose. Phantom dogs get their tan points from the agouti gene. They are essentially black dogs but the agouti gene is expressed over their black hair to produce tan points. A phantom cannot have patches of white; if they did, they would be considered tri-color. While the word phantom might make you think of a ghost, these puppies are not scary at all!

Not every Cockapoo will look exactly the same.

How they look depends on the traits they inherit from their parents.

Not only can you choose from different sizes, you can also choose a Cockapoo from a huge variety of colors. There are over 11 different kinds of Cockapoo colors and coat patterns.

Cockapoos can be solid coat colors, though a lot of the time these colors will come with some white marking, usually on the chest. The most common Cockapoo colors are apricot, chocolate, black, cream, white, red and golden. There are also different patterns like merle, parti, phantom and tri-color.

The rarest color is the merle.

If you want a unique color, you might want to get a Cockapoo with more than two colors, like the roan or parti!

No matter which color you choose, each Cockapoo will be equally great because color doesn’t affect temperament or health. You will be incredibly happy with a Cockapoo no matter if it is red, black, golden, or merle.

Did you know these perfect pups can come in so many different colors?

Leave us a comment and let us know your favorite. 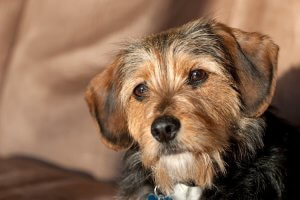 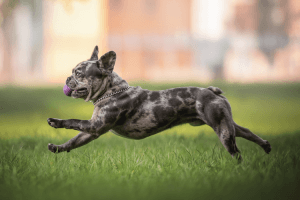