Rottweilers are an iconic and versatile breed. Throughout history this noble dog has been used for guard, police, guide dog work. They were first used during the Roman era as protection for humans and to drive cattle across Europe.

What many people do not know about this breed is that there are actually two types, the German and American Rottweiler.

These dogs look very similar and can be hard to tell apart. But they are different in their purpose and personality!

Keep reading to find out the differences between the German and the American Rottweiler. We also share how to spot them and how they are bred.

The German Rottweiler is considered one of the oldest dog breeds in existence. They are the original purebred.

One of the main reasons the breed has been around for so many years is due to its breed standard. The Allgemeiner Deutscher Rottweiler-Klub (ADRK) is the official association of the German breed and keeps very strict breed standards.

Regardless of whether the dog was born in Germany or not, as long as it adheres to these breed standards it can be classified as a German. This means that you can get German Rottweilers in America, but they are rare!

All German puppies look very similar due to the intense breed standards set by the ADRK.

Overall they have a classic appearance with a medium-length dense black coat and tan markings. These markings should be on their eyebrows, snout, chest and lower legs.

Their general appearance is strong and robust with a broad head. They have muscular necks and bodies, a deep chest and thick, strong legs.

They are officially considered a medium-large breed, although many people call them a large dog. Their muscle mass makes them look bigger than they are. The average dog will weigh around 100 pounds and measure up to 25 inches tall.

A distinguishing fact about the German variety is its undocked tail. Tail docking is banned by the breed standard.

The German Rottweiler is a fearless and powerful breed that makes one of the best guard dogs. They are still extremely similar to the original breed which was used for herding and driving flocks of sheep.

These dogs are descended from Roman cattle-driving dogs which were left in a region in Germany called Rottweil. For hundreds of years they accompanied their owners on expeditions, carried parcels to farmer’s markets and helped with herding sheep.

This dog has a natural temperament to guard and protect. Many can be a bit distant and alert with strangers. They will relax once they realize the person is not a threat, but because of this most are not suitable as family pets.

These dogs are devoted and intelligent making them highly trainable and adaptable. They are perfect for roles like assistance dogs for the blind and guard dogs. They are compatible with many types of work and with the right training will thrive. 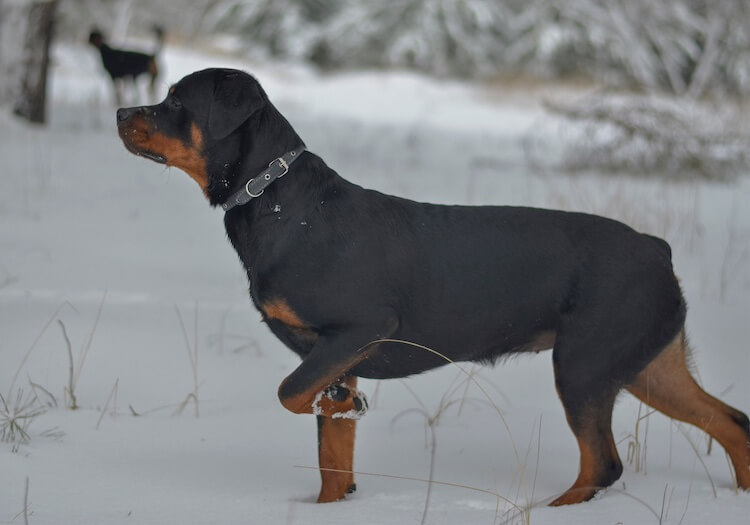 The American Rottweiler is the second type. They descend from the German variety, but there are some key differences between the two.

Americans look like an elongated “classical” Rottweiler. They have longer legs and snout, a slimmer head and neck and less muscle. Most have the traditional black coat with rust but some are rare colors like red, blue or all black with no markings.

The American cannot be registered by the ADRK as they do not comply with the original breed standard. . They were admitted to the American Kennel Club (AKC) in 1931. The AKC is less strict about the breed standard and so the appearance of each American puppy can be different.

For example, the AKC accepts mahogany and rust markings as well as the classic tan.

An American Rottweiler will also have a docked tail, while the German does not.

There are also more subtle differences as the AKC accepts longer muzzles and narrower heads. Americans are also a few inches shorter and generally weigh less. Their slim appearance and reduced muscle makes them very athletic.

They are generally not as powerful, but they are full of energy and will need an active lifestyle. A long walk and plenty of play is enough to keep these dogs entertained.

American Rotties are loyal, intelligent and protective. They are also affectionate with children and highly trainable, which makes them great family dogs.

Whereas the German is well suited to a working life, the American variety is suited to family life. Many often adopt their own job as the family ‘protector’.

The German type is generally what people picture when they think of the breed. Strong, sturdy and muscular they look very similar in appearance to their ancestors. The most striking feature is their low-hanging, undocked tail and traditional black coat and tan markings. The markings, according to ADRK, must be only on the cheeks, muzzle, throat, chest, legs, over both eyes, and under the base of the tail.

American dogs are slimmer, lighter and leaner with longer muzzles. Their coat pattern can be the same, but there is more flexibility in color and markings which is why you can see red and blue Rottweilers. A key difference to easily tell these two varieties apart is the tail. The American will have a docked tail while the German will not. Other subtle differences include the slightly longer legs and neck of the American.

German and American Rottweilers tend to differ most in their temperament and personality. Germans have a long history of working in roles such as guard dogs. They are bred for their strength and endurance.

American Rotties are often less powerful, more affectionate and more suited to a family role. They tend to deal better with other pets in the house too.

Extreme nervousness or hostility are both disqualifying factors for either type.

Why Do They Look Different?

The Rottweiler dog breed comes from the town of Rottweiler in Germany. Both German and American types are of German descent. But breeding etiquette and standards are quite different between these countries.

Differences in German and American Rottweilers are the result of the two different registering associations that have different breed standards.

The standards to certify a German variety are extremely strict and set by the ADRK. The ADRK will only accept dogs that meet their breeding standards and have parents who are both registered with them. Each puppy must also pass a breed suitability test to check its conformity with official standards. The ADRK can eliminate a dog for having certain faults, which can be anything from having a kinked tail to being too shy.

American dogs are registered by the AKC. The breed standards set by the AKC are a lot more lenient. They have removed some of the strict appearance standards such as the extreme muscled nature to try and produce a leaner dog.

The AKC will still eliminate American puppy for faults like shyness, but they tend to be less severe with their criteria.

Therefore these two varieties still look similar, but have subtle differences. The appearance of Rottweilers is much more standardized in Germany than it is in the US.

Interestingly, the UK Kennel Club does not distinguish between a German or American Rottweiler. Their breed standard describes the appearance as either a docked or undocked tail. This is a good clue to just how little difference there is between these two breeds on first glance.

Which Dog Is Bigger?

The German Rottweiler is larger than the American by one or two inches and tends to weigh as much as 20 pounds more.

Do not be surprised if you come across an American that is smaller than a German Rottie. The breed standard is a lot less strict for Americans. Their size and height range is a lot wider:

Americans are usually a bit smaller and the German is usually broader and burlier due to its history as a working dog. Its hind legs especially have well-developed muscles.

A key proportion for the German type is the length-to-height ratio. A puppy’s body length should not exceed its height by more than 15%. These dimensions are not as important for other Rottweilers.

Which Is More Expensive? 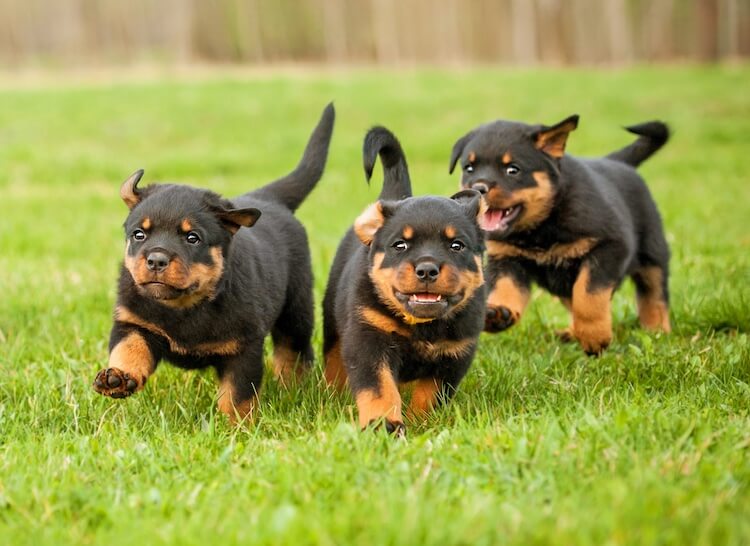 Rottweiler puppies are expensive to buy.

The average price for an American Rottweiler is $750 to $1,500. German Rottie puppies are sold for at least $2,000 and sometimes up to $3,000. There will also be additional shipping fees if the puppy is being imported from Germany.

German puppies are almost twice as expensive as Americans for two main reasons:

The maintenance costs for both puppies are about the same.

Is My Rottweiler German or American?

The differences between German and American Rottweilers are subtle, do not forget that both dogs come from German descent.

One of the easiest ways to tell which type you have is to look at our checklist below:

A more subtle difference is in their size. Americans tend to be smaller and less muscled than their German siblings.

The key difference between the German Rottweiler and American Rottweiler is their temperament. Germans are bred for work and thrive with a ‘full-time’ job working in a role like a guard dog or a role in the military. Americans have a more affectionate nature and like to be a part of a family where they can take on their own job as a protector of their humans.

Both dogs are intelligent, full of energy and need a devoted owner who will have the time for training and walking.

Germans tend to have a stronger, more old-fashioned look. Their temperament is much more calm, loyal and protective.

American dogs may lack the classic “Rottweiler” look, but they make up for this in playfulness and love for their family. If you are simply looking for a family guard dog they are perfect. 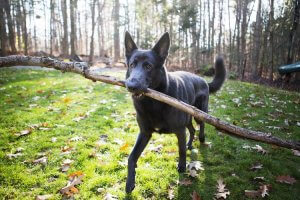 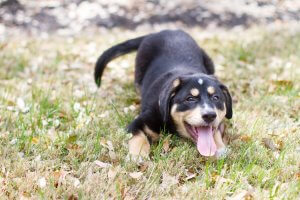