Miniatures have the same stamina and endurance as any type of German Shepherd too. But, they have better companionship skills. The most affectionate Miniatures are those that mixed with Golden Retrievers.

Now that you have gotten a sneak peek, we will share everything you need to know about this mini breed… 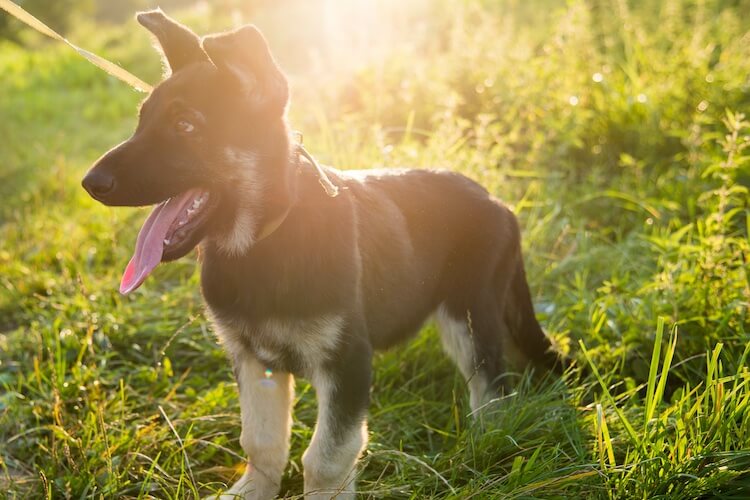 Most commonly, Border Collies are used to create this mix.

Poodles are also a popular breed to create this breed. The Poodle contributes its family-friendly personality to create a dog that is more suitable for households with children. These puppies not only excel as great companions and family pets, but they are low-shedding too.

A handful of other dog breeds can also be used to create this breed:

You may be wondering if dwarf German Shepherds are the same as miniatures. The short answer is no.

While both dogs are small, dwarves are the result of a genetic mutation. For a dwarf to be born, both parents must have pituitary dwarfism. It can be present at birth or show up during early puppy growth periods. Dwarves have a smaller body, short limbs with deformities, and many health problems.

Miniature German Shepherds are purposely bred and do not suffer from the same health problems.

The mini German Shepherd is just as fierce, brave, loyal, and energetic as any standard Shepherd. They also keep the Standard’s attributed hard-working personality too.

The miniature German Shepherd is a mix between a German Shepherd and a small to medium-sized dog breed such as a Border Collie, Poodle, or Golden Retriever. It is not purebred.

Many people want the personality and temperament of a large dog, but in a smaller size.

The miniature German Shepherd is a perfect example of this.

Minis are bred to keep the work ethic, loyalty and obedience of the German Shepherd. Most importantly, though, this mix is bred to fulfil the demand for German Shepherd-like dogs that are smaller and more suitable for a wide variety of owners.

Miniature German Shepherds will not stand any taller than 20 inches when fully grown. This is six inches smaller than their full-size siblings. As adults, minis may only be half the size of a standard at 50 pounds in weight.

This mix is exceptionally intelligent, easy to train, and eager-to-please.

They are an excellent candidate for an emotional support or service animal.

Most Miniature German Shepherds keep the dominant coat color of a German Shepherd. They will have double coats that are more often than not, tan with a black saddle pattern. However, it is not rare to see solid black, white, sable, or black with red coats too.

Miniatures really do look like a small German Shepherd. The main differences are coat color, texture, and length.

A key difference between purebreds and miniatures is coat texture.

The miniature German Shepherd can have a variety of coat textures depending on what dog breed was used for mating. Minis bred with Poodles may have a slightly wavier coat. Purebred Shepherds have coarse and straight coats.

Many mini German Shepherds have the large, upright ears that their parents are known for. However, there can be some variation in their appearance depending on what breed was used:

They usually shed all year long with larger amounts of shedding in the spring and fall seasons. This is because they have double-layered coats that have to thin out in the spring or bulk up in the fall. Some even refer to this breed as “German shedders”!

How Big Are Miniature German Shepherd?

Miniature German Shepherds live up to their names and are much smaller than a standard. In fact, most minis weigh less than 50 pounds. Compared to purebreds that can weigh nearly 90 pounds, they are much more compact.

A miniature German Shepherd will only stand 15 to 20 inches tall and weighs between 30 and 50 pounds.

The true size of a miniature German Shepherd will depend on what breed is used for crossbreeding. For example, a mix between a German Shepherd and a Border Collie will be taller and heavier than a mix with a Corgi.

Yorkshire Terriers are the smallest dog breed used for breeding miniature German Shepherds. This mix is not very common, but it produces the smallest pups!

These are a few of the best ways to describe a miniature German Shepherd.

This mix keeps most of the German Shepherd’s temperament and personality. If you know a lot about purebred Shepherds, then you will have a good idea as to what to expect from a mini.

Besides being hard-working herding and guard dogs, miniatures also have a bit of a soft side. They are not as aloof as full-sized purebreds, but may appear standoffish when around people or dogs they do not know. They are very protective of their owners and will be loyal to them. Those mixed with Golden Retrievers or Poodles have calmer temperaments than those mixed with Border Collies.

Poodle or Golden mixes are ideal for families with children. Border Collie mixes will be higher strung and do not thrive in households with kids.

This mix does not bark much. They will bark to alert you of danger or strangers, which is due to the German Shepherd’s guard dog nature, but they are not overly vocal.

There is no guarantee what miniatures will look and act like. Most puppies retain the characteristic appearance and personality of the German Shepherd, but there will be some variation depending on the cross. 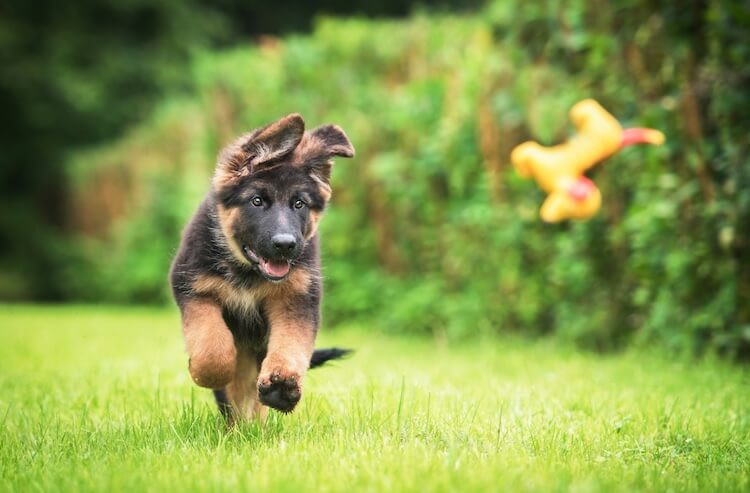 A mini German Shepherd lives longer than a German Shepherd, on average. Miniatures can live up to 15 years, while purebreds live between 12 to 14 years.

This is due to the fact that smaller dogs age slower than larger dogs. Also, being a mixed breed dog helps most minis have a longer lifespan, this is known as hybrid vigor.

There is still a chance miniature German Shepherds will inherit health conditions from their parents. They are prone to hemophilia, elbow dysplasia, hip dysplasia, degenerative myelopathy, gastric dilatation-volvulus, epilepsy, and pituitary dwarfism:

There is some controversy surrounding miniature and teacup dog breeds. Some people mistakenly assume that a mini breed is simply a smaller version of its purebred parent. This is not true!

The miniature German Shepherd is not a purebred dog breed; it is a hybrid mix. These smaller puppies can keep some recognizable traits of a German Shepherd, but they are not purebred.

Some breeders try to sell their miniature puppies as purebred dogs.

If you are looking for a dog that is 100% German Shepherd, but is smaller-sized, you will have a hard time finding one. They do not exist unless you are considering dwarf, however these dogs come with many health problems.

Most miniature German Shepherds are created via crossbreeding.

There are two other ways that breeders may have litters of minis:

Breeding two German Shepherds that are both carriers of the Pituitary Dwarfism gene is not ethical. Dwarves can be affected by many health conditions such as hypothyroidism, poor kidney function, and skeletal defects. Dwarves are not the same as miniatures.

Some breeders selectively breed German Shepherd puppies that are runts. This can also produce smaller puppies after several generations.

Similar to dwarfism, the practice of intentionally breeding runts can create puppies predisposed to health conditions. These puppies will have lower than normal birth weight and may fall behind on the growth curve.

Make sure to avoid breeders that breed runts or dogs with pituitary dwarfism. 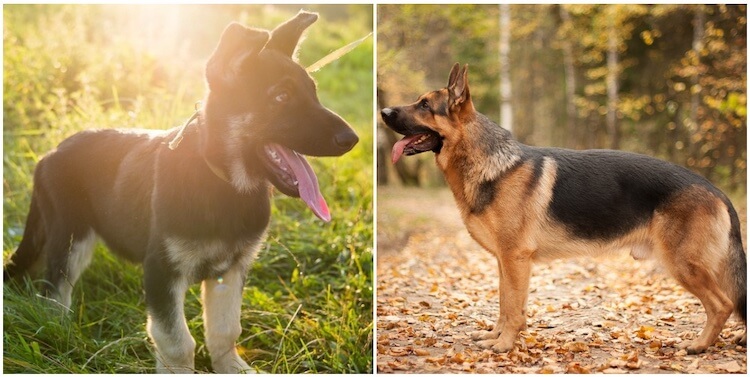 Miniature German Shepherds can be half the size of standards! This means they do not grow taller than 20 inches and weigh no more than 50 pounds. Due to their smaller size, minis have a slightly longer lifespan of 15 years.

They will likely keep the alert, athletic and muscular appearance of their purebred parent, but it will be on a smaller body.

Most keep the German Shepherd’s bi-color coat too. This means they are mainly tan and have a saddle-shaped black pattern on their backs. Other coat colors include: white, black, sable, black and silver, or black and red.

Breeders know there is a demand for “mini” breeds.

Compared to a purebred, minis are about half the size and live longer. Their appearance can vary, but most will keep the tan and black coats.

Miniatures excel as companions and are far less aloof than their purebred parent. They have the same stamina and endurance, but, they have better companionship skills, especially those that mixed with Golden Retrievers.

If you are looking for a high energy pup, that doubles as a good family guard dog, you have found the right mix.

Does this mix suit your family? Let us know in the comments.

Rachelle is a veterinary student attending the cooperative veterinary medicine program at the University of Nebraska-Lincoln and Iowa State University. After graduating in the spring of 2023, she plans on practicing companion animal medicine. In her free time, Rachelle enjoys hiking with her Great Pyrenees mix, sewing, and watching documentaries.