Are you curious to learn how long do pitbulls live?

Pitbulls are actually very healthy dogs and can live for over 15 years.

But the real answer actually depends on the type of Pitbull you have. The term ‘Pitbull’ is not actually one dog breed. It is a category of dogs containing four different breeds which all have their own lifespan.

Keep reading to find out what things affect your Pitbull’s lifespan and how long you should expect yours to live.

How Long Do Pitbulls Live? 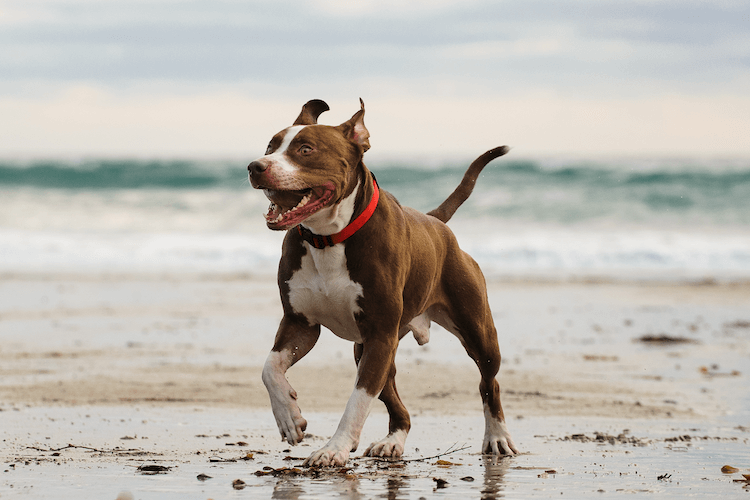 Pitbulls on average can live for between 8 and 16 years. That is about 51 to 87 human years. Some have been known to live for as long as 20 years, but this will depend on a number of factors:

A common myth about a pitbull’s lifespan is that females can live longer than males. Whether you have a female or male puppy does not really matter because gender does not affect lifespan in dogs.

The genetics of your Pitbull are the most important factor for how long they will live.

Here’s a breakdown of the average lifespan of a Pitbull by breed.

American Bullies and American Pit Bull Terriers have the shortest lifespan of 8 to 15 years. Some American Bullys can live for 15 years if you take proper care of them and they are in good health.

The American Staffordshire Terrier lives the longest with a lifespan of 12 to 16 years. But will your Pitbull live this long?

Every dog breed has health issues that could affect their life expectancy.

For example Pitbulls can inherit a genetic heart disease called aortic stenosis. If undiagnosed this disease could lead to heart failure and an early death. This is why it is important to get puppies from reputable breeders who have tested their dogs for genetic health issues.

Another important factor that plays into how old do pitbulls live is their size.

Size is a possible reason why larger American Bullys do not live as long as smaller American Staffordshire Terriers. Smaller dogs tend to live longer because larger breeds age faster than smaller ones.

Breed, genetics and size play a big role in the average lifespan of a pitbull, but how you take care of them is also important. If you really want to make sure your Pitbull has a long lifespan, quality care is very important.

A dog that is regularly taken to the vet, is up to date on vaccines, is fed a proper diet and gets daily exercise will live longer.

Daily exercise is very important because this breed is prone to becoming obese. Obesity is known to be associated with health complications such as diabetes, cardiac diseases, respiratory diseases, urinary disorders and reproductive disorders.

Dogs that are obese will live shorter lives. How much obesity will shorten their life is unknown, however in a study done with Labrador Retrievers it was observed that obese dogs lived two years less than dogs with an optimal body size.

What Was The Oldest Pit Bull? 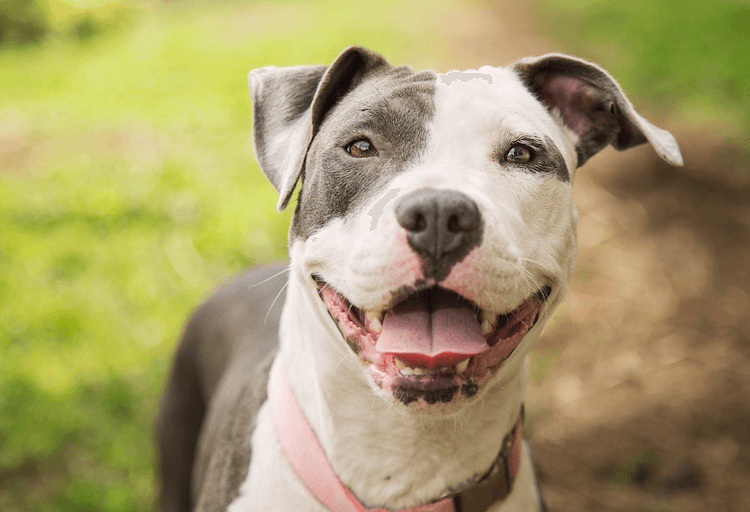 The average pitbull lifespan is 8 to 16 years, but there are many who can live longer than this. There have been reports of owners saying their Pitbulls are 18 years old. There have also been claims of Pitbulls living past 20 years.

Unfortunately there are no official records of the oldest living Pitbull.

The most popular unofficial claim for the oldest Pitbull was a dog named Max. Max was a Pitbull from Louisiana that lived for 26 years.

Whether this is true or not Pitbulls can live for a long time.

Your dog might not live as long as Max, but with the American Staffordshire Terrier you should expect 12 to 16 years.

The oldest dog to have ever lived was an Australian Cattle Dog that was 29 years and 5 months old. 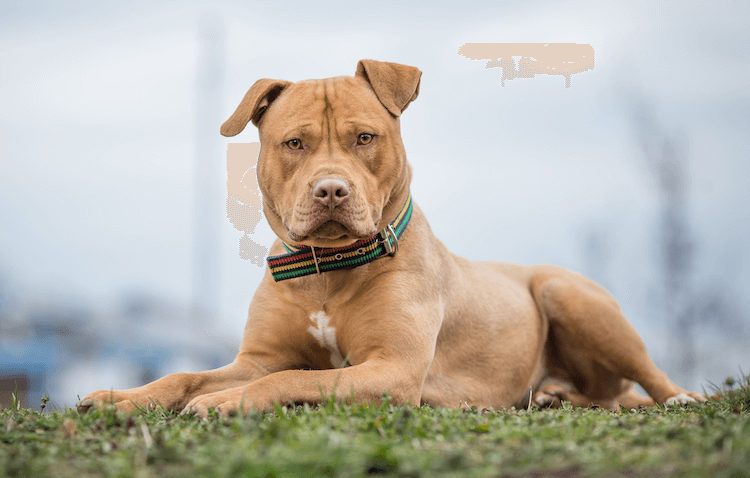 Pitbulls that live indoors generally live longer than those who live outdoors. If your dog must live outside always put a fence around your yard to prevent them from getting out.

Inside the house Pitbulls are less likely to catch diseases (tick-borne diseases, heartworms, or parasites), eat something they are not supposed to, or find themselves involved in some type of accident.

No matter if your dog lives inside or outside it should always be up to date with vaccines.

Pitbulls that are not fixed are more likely to develop tumors such as prostate cancer and mammary gland tumors.

One study found that dogs that were sterilized lived 1.5 years longer than intact dogs.

If you really want to extend your Pitbull’s lifespan then fixing them is a good idea. It is also important to fix your dog if you do not intend on breeding them.

Good health care is one of the most important things that you can do for your dog. With good care and a proper lifestyle your Pitbull will be generally healthier and less likely to get any diseases.

Make sure you take your Pitbull for regular vet appointments and that they are always up to date with their vaccines and preventatives. Dewormers, preventatives and vaccines are all important, especially for puppies.

It is recommended that Pitbulls be tested for hip dysplasia, congenital cardiac disease, autoimmune thyroiditis and cerebellar ataxia. By doing this breeders can avoid passing on rare diseases and breeding unhealthy puppies.

It is recommended that you exercise your dog for at least an hour a day.

A dog that is not properly exercised might gain too much fat and lose some of their muscle mass. Obesity and its effects will shorten their lifespan by up to two years. Obese dogs are more likely to develop medical conditions such as heart problems, arthritis and diabetes.

It is important that you always feed your Pitbull high quality kibble and control the amount of food you give them. You should not free feed them.

The typical pitbull should be fed two to three cups of kibble each day based on their age and activity levels. If you give your dog too much food and do not exercise them you will shorten their lifespan.

Chronic stress has been associated with many health issues that can affect a pitbull’s lifespan. One study found that dogs that were stressed or fearful actually lived 0.5 years less.

Properly grooming and bathing is also important. Pitbulls are known for developing a lot of skin allergies. Their skin is very sensitive and over-washing can dry out their skin and strip the natural oils from their coat.

Doing these things might not directly extend your Pitbull’s lifespan, but it does improve their quality of life. Dogs that are well cared for are much more likely to be happier and live longer.

What Do Pitbulls Usually Die From? 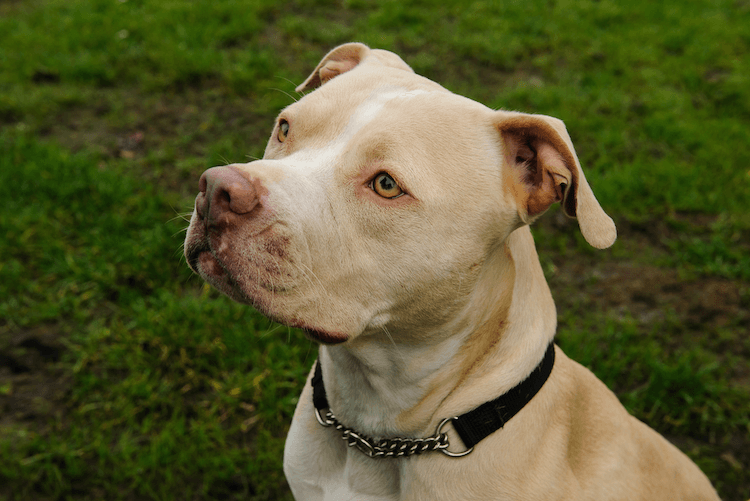 Many Pitbulls die of natural causes and old age because they are generally very healthy dogs. Old age is considered to be between 8 and 16 years.

Common causes of death that are not natural include cancer, heart problems and environmental factors. These health issues can shorten their lifespan and often mean some live less than 8 years.

The most common health issue that Pitbulls die of is cancer.

Cancer can develop because of a genetic trait, but it can also occur because of environmental hazards. In a study evaluating the death records for the Staffordshire Bull Terrier it was found that 44.4% of deaths were related to cancer.

They are naturally prone to skin cancer and malignant tumors (i.e. cutaneous hemangiosarcoma). Hemangiosarcoma is a malignant cancer and can rapidly reduce the lifespan of a Pitbull. Because of this you need to make sure you frequently check your dog’s skin for any lumps or warts.

As a breed Pitbulls are also predisposed to heart problems.

The most common heart condition that they inherit is aortic stenosis. This is a birth defect where the aortic valve is too narrow. This genetic condition is treatable and as long as it is diagnosed your Pitbull should live a happy life.

Bloat is a medical emergency often diagnosed in larger breeds like the Pitbull. It happens when the blood circulation to their stomach is suddenly cut off and is often caused by a dog eating too fast or too much.

There are also non-health related issues that can reduce a Pitbull’s lifespan.

If your dog lives outside then environmental factors may shorten its life.

Pitbulls that like to wander around or chase after cars or dogs might be killed in an accident. They may also unknowingly eat rat poison or inhale pesticides if they make their way into your neighbor’s yard or drink polluted water. This is why it is especially important your yard is fenced if you have an untrained pup.

If you get a Pitbull puppy from a breeder it is very important that you train it and socialize it from a very young age. This will help to reduce the number of accidents they are involved in. 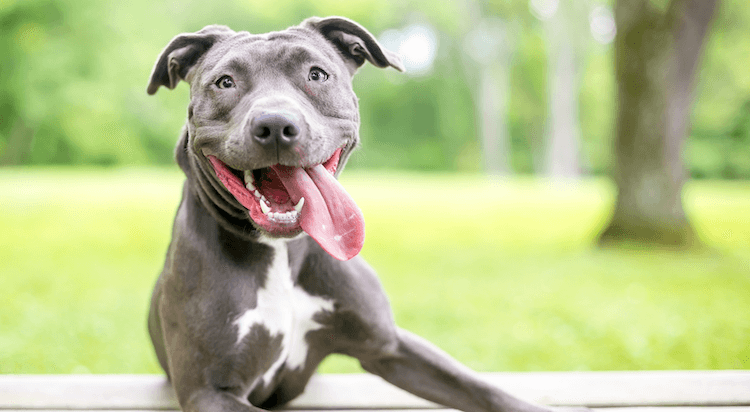 Pitbulls come in a variety of over 25 different colors including black, blue, brindle, brown, fawn, liver, red, sable, white and tri-color. Some other colors like merle are also possible but are not considered standard.

In general color does not affect the lifespan of a Pitbull.

Just because you have a rare Pitbull like the blue nose does not mean that it will live longer. You can expect the blue nose pitbull lifespan to be between 8 and 16 years. This range depends on factors such as size, health, nutrition and exercise.

All health issues that affect Pitbulls can appear, no matter their color. However there are some colors that can have more health complications.

Merle pitbulls can have more health concerns which is why it is not considered a standard color. These health complications are especially true for dogs that are double merles, meaning that they have inherited two copies of the merle gene.

Puppies that are merle have a chance of being blind and deaf. According to one study about 10% double merles were deaf in one ear and 15% in both ears.

Merle pitbull lifespans can average anywhere between 8 and 16 year as blindness or deafness doesn’t shorten it. However many people think it is unethical to breed them since they will have a lower quality of life.

Most single merle pups are completely healthy and live long and happy lives.

The average Pitbull can live anywhere between 8 and 16 years. A Pitbull can even live to be more than 16 years old if it lives a healthy life and does not inherit any illnesses.

How long a Pitbull lives will depend on many factors such as breed, size, health, nutrition and exercise.

The breed with the longest lifespan is the American Staffordshire Terrier which lives for between 12 and 16 years. American Bully and American Pit Bull Terriers have the shortest lifespan of 8 to 15 years.

If you really want your Pitbull to live for a long time, the key is to provide it with proper health care, a good lifestyle and diet, and go on long walks each day.

Let us know how old your pitbull is in the comments. 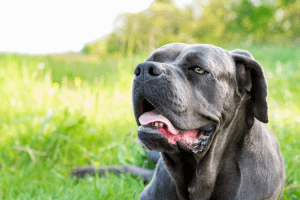 How Much Is A Cane Corso? Cane Corso Price By State 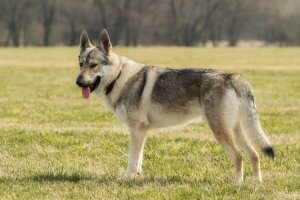