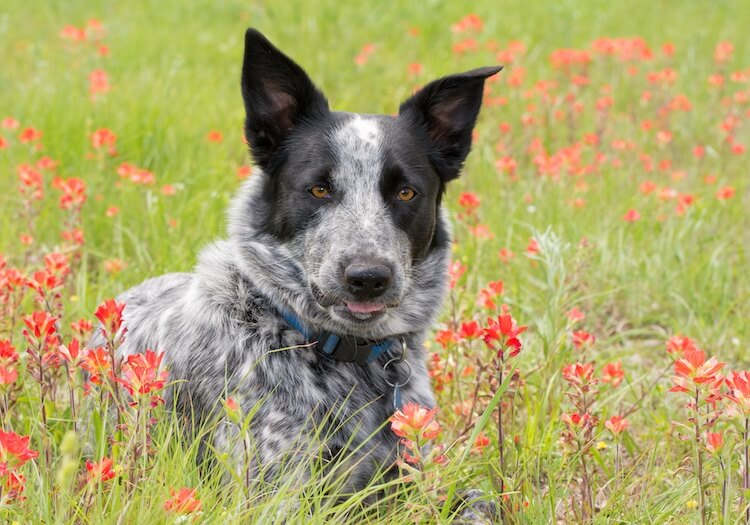 Texas Heelers are medium-sized dogs that are hard-working, loving, energetic, loyal, and smart. Despite these amazing qualities they are often confused for Blue or Queensland Heelers.

This Heeler is like many herding dogs. He has a loyal personality and a love of adventure. Yet, there are a few unique characteristics that make Texas Heelers stand out.

In this article, we will discuss their origin and cover everything you need to know about owning one. We also share what makes this breed stand out and explain the differences between them and Blue Heelers.

What Is A Texas Heeler? 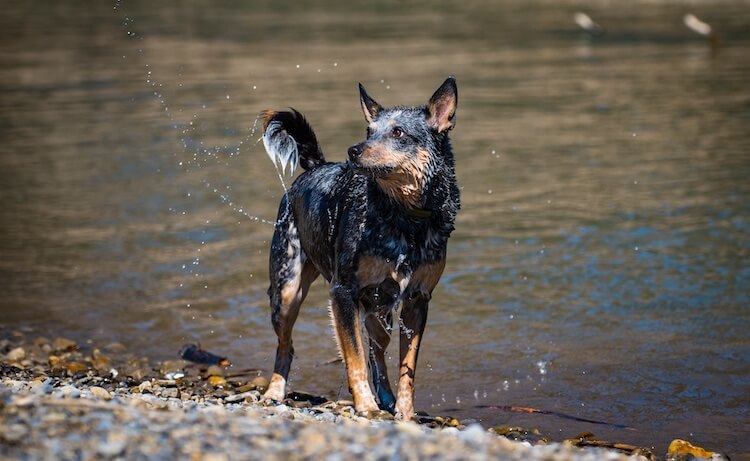 The Texas Heeler is a mix between the Australian Cattle Dog and the Australian Shepherd. This dog was originally bred by cattle ranchers for their ability to work with and herd cattle.

Many Texas Heelers are now enjoyed as family dogs who do very well in canine sports and agility courses. Whether you choose to use them as a working dog, or as an active family pet, they will need lots of exercise each day.

The Texas part of their name comes from the fact they were originally bred in the state of Texas. The Heeler part is from their parent, the Australian Cattle Dog, which is also called a Blue Heeler. Heeler has long been the nickname of Australian Cattle Dogs as they would often nip at the heels of cattle.

Sometimes they are a mix of Australian Cattle Dog and Border Collie, not the Australian Shepherd as this mix is less common. Border Collie mixes still have the qualities of a herding dog, but have a long feathered coat.

Most Texas Heelers have a short to medium length coat that can be any mix of black, blue, red, white tab or merle. Some puppies will look closer to the Australian Cattle Dog, others will look like an Australian Shepherd. Their appearance is highly variable.

Just because your dog may look like an Australian Cattle Dog, does not necessarily mean that they will inherit their temperament.

Their personality is very hard to predict.

As both parents are herding dogs, it can be assumed that this mix was first bred for the herding needs of cattle ranchers. But, the origins of this mix are not very clear.

What is known is that the Texas Heeler is a hybrid dog that was first registered by Lucy Guynes in 1970 to the Dog Registry of America. It is likely this mix occurred for many years before being officially registered, but 1970 is the first official record.

Due to the limited information about their origin, it may be helpful to discuss the history of both parents.

Australian Cattle Dogs were originally bred in Australia by mating an English dog imported into the country with the local wild Dingo. This breed needed to be high energy and strong to work on cattle ranches.

Many Texas Heelers are taller and lankier than both of their parents. However, if they take after one parent, their body looks similar to the Australian Cattle Dog.

Texas Heelers are medium-sized dogs with moderate muscling, a bobbed tail and upright ears. Most have upright ears, but their ears will occasionally be folded down, similar to the Australian Shepherd.

The most common coat colors include black, blue merle and blue ticked with trimmings of tan or white, especially around the feet and legs. Their coat color is very difficult to predict due to them being hybrids. Even puppies within the same litter can look distinctly different from one another, especially when it comes to color.

Their coat length and texture are pretty consistent. Their coat is between short to medium in length while the texture is soft and straight.

This coat consistency makes maintenance easy. They will need brushing at least three times a week and there is no need to schedule regular grooming appointments.

Texas healer is known to be a moderate to heavy shedder, and so is not considered to be a hypoallergenic dog.

Texas Heelers weigh between 25 and 50 on average. It is considered a medium sized dog.

Are Texas Heelers Hard To Train?

When it comes to training, this hybrid is very eager to please and exceptionally smart. One-on-one obedience training with a Texas Heeler is a very easy process, even for a first time owner. They respond very well to positive reinforcement dog training and can learn a wide range of dog tricks. Training them is a fun and enjoyable experience.

The difficult part of training is to make sure that they have enough socialization, especially when you bring them home.

Socialization with new dogs, people, and places is very important.

Texas Heelers who do not have proper socialization and training are more likely to herd family members within the household. They may have a desire to nip at the heels of young children and can be more susceptible to separation anxiety and aloofness.

Working closely with an obedience school that has experience with herding breeds is highly recommended.

They are best suited to families without pets and children older than the age of ten. This will make sure that no family member is being unintentionally herded.

Due to their origin as a working breed they need to have lots of physical activity. This will help them stay fit and mentally healthy. They need at least 60 minutes of exercise per day and will excel at high intensity activities such as: agility courses, flyball, or competitive herding.

If a Texas Heeler does not get enough walks, they tend to feel anxious and can even be destructive in the house.

Though many would say “a tired dog is a good dog”, it is important to achieve this through a combination of physical and mental stimulation. A mix of both will result in a happy and relaxed Texas Heeler!

If you are planning on adopting this breed as a family pet, they still need a job. They have a very strong desire to work. Great jobs include retrieving the mail, or tidying their toys up. Giving Texas Heelers a job to do will help them feel accomplished. It is also a great way to strengthen the bond between owner and dog.

How Much Is A Texas Heeler?

The typical cost of a Texas Heeler can range from $200 to $500. The price difference will be based on each breeder and where the puppy is coming from.

A Texas Heeler being purchased in Texas, the epicenter for breeding these dogs, will cost much less than in other states. When purchasing puppies in other states expect to pay closer to $500, especially if the breeder is providing micro chipping or transport for your puppy.

If you decide that this dog is the perfect fit for your family, you may end up on a waiting list.

These dogs can be very hard to find in the northern states, especially Connecticut, Illinois and Michigan. Luckily, many breeders are willing to work hard to get their dogs into good family homes.

There are many who may prefer to adopt a dog instead of buying a puppy.

All of these hybrids are extremely hard-working and loyal, similar to both of their herding parents.

Texas Heelers have the need to work very hard. They also have the need to please their owner engrained into their personalities. This can result in them being very affectionate towards their immediate family and aloof to strangers.

Their personality trait of being aloof is due to their parents’ herding origin. Herding breeds naturally want to herd strangers away from their family or flock in order to protect them.

Despite having this personality trait, they are not known to be aggressive. Unfortunately, some have the desire to herd small children, or smaller animals in the same household. This desire may include chasing, nipping and herding.

It is because of this tendency that they are not the best match for:

Texas Heelers are incredibly loyal, affectionate, caring, and smart dogs. With the aid of professional training, these dogs can learn to live well with young children and other dogs. However, you should not expect them to be cuddly like a mini goldendoodle. They are working dogs.

It is important to note that the Texas Heeler is not a Blue Heeler. They are a mixed breed dog bred from the Blue Heeler (i.e. Australian Cattle dog) and Australian Shepherd. Because of this, there are some similarities between both dogs that cause them to be confused for one another.

However, there are also some notable differences between these two dogs.

The purebred status of the Blue Heeler tends to make them more expensive at $400 to $800. The Texas Heeler is usually less expensive in comparison and costs $200 to $500.

The exercise needs between the Texas Heeler vs. Blue Heeler are slightly different as well. Texas Heelers have a moderate energy level, which can easily be satisfied by a home with a semi-active lifestyle. They need around 60 minutes of exercise a day.

Blue Heelers have an extremely high energy level and need to have an active job. They are also known for sleeping only 4 to 6 hours each day.

When it comes to personality and temperament there are many similarities shared between both dogs. Both breeds are known for being obedient, intelligent, and hard-working. These attributes make them relatively easy to train. Both dogs are also sensitive to touch and loud noises, so sensitivity training is a must for both breeds.

One personality difference between these dogs is the level of affection each dog gives to their owners. Texas heelers tend to be overly affectionate towards their owners. Because of this, they are often called “velcro dogs.” In contrast, the Blue Heeler can come off as unfriendly or standoffish due to their independence.

Most Texas Heelers are medium-sized lanky dogs. They have a short to medium length coat and are black, blue merle or blue ticked. However, they can come in almost any color imaginable. No two mixes are ever the same!

Many of these hybrids have the affectionate, but clingy, personality of the Australian Shepherd while also being adaptable and hardworking like the Australian Cattle Dog.

To be at their very best, this mix will need at least 60 minutes of intense exercise each day. Without this energy outlet, herding and anxious behaviors can show themselves in the household. For these reasons, training must begin at an early age. This will make sure your dog has proper socialization and does not attempt to herd younger family members.

Texas Heelers are a wonderful combination of two dog breeds. They make a perfect addition for any active family with older children and no other pets. If this is the mix for you, let us know why in the comments below!

Ashley is a veterinary student at the University of Minnesota and will graduate in 2022. She has worked with many dog patients over the past six years as a student and a veterinary technician and enjoys client communication and education. Her favorite dog breeds are Salukis, Boxers, and Weimaraners.