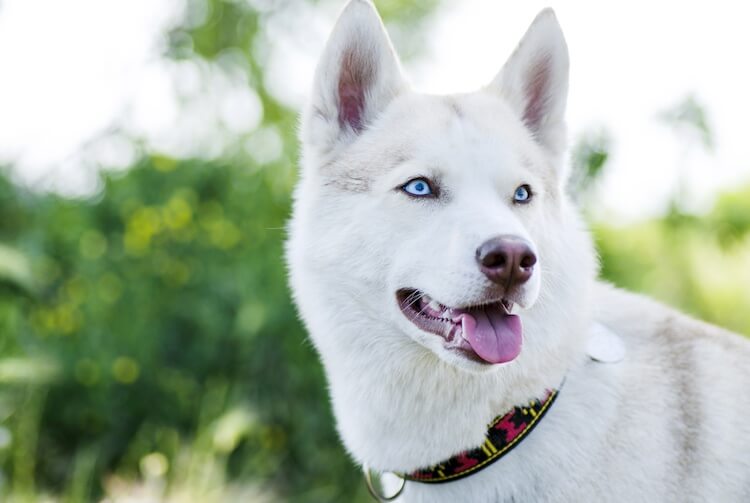 People everywhere love the Siberian Husky for its wolf-like appearance. But have you ever seen a White Husky?

The White Husky, also known as the Albino Husky, is not a dog breed, but a type of Siberian Husky. What makes it unique is its majestic pure white fur. It has an immaculate full, white coat that makes it look like a majestic snowy creature.

White Huskies have recently become popular for their friendly and gentle personality. They are far more than sled dogs!

Has their white fur caught your eye?

Their pure white fur is an accepted coat color by the American Kennel Club and is considered standard.

All white Huskies are born with a pure white coat. This white color comes from a gene that is both recessive and rare, so both parents must have it to produce white puppies. Because of this, white Huskies are the rarest type of Husky.

Some Huskies called “Isabella” have all white coats too. However, when seen under the right angle of light they have a yellow or beige staining to their coat. They also have liver-colored nose, lips, and eyelids.

Isabellas are often confused for white Huskies, but they should not be. They are not a purebred white Husky. They are a different color variation.

While White Huskies are unique in coat color, but they are no different in personality, physical fitness, energy, size, and temperament.

White Huskies have the same roots as all Siberian Huskies.

The Siberian Husky originates from Siberia in northern Asia. First evidence of the existence of this dog dates back to about 3,000 years ago, which makes it one of the oldest dog breeds known.

In 1930 the Siberian Husky became a recognized member of the American Kennel Club. The first Husky to be registered was an all-white one!

The Husky was mostly bred as a sled dog to compete with its canine teammates and race on snowy terrains for most of the 20th century.

They are still used for sledding and competitions today, but they are more than working dogs. In stealing the hearts of people everywhere, they have also become loyal companions and family dogs because of their beautiful appearance, intelligence, and guardianship.

Where Do White Huskies Come From? 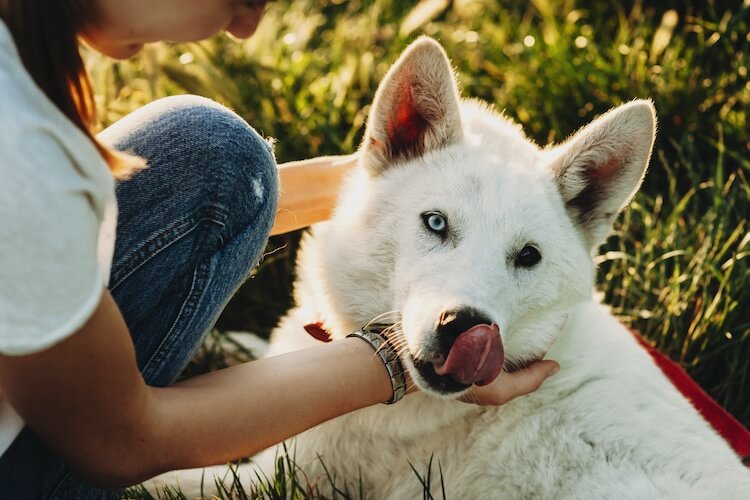 The easiest way to produce a white Husky is to breed it from two purebred white parents. As both parents have the recessive all-white fur gene, all of their puppies will always be white.

If the puppy receives any other gene, then the recessive gene would be masked by the dominant one, and it will have another solid or patterned color like black, gray, and/or white. This is how red and white or black Huskies are bred.

White Huskies can sometimes be bred from other colors of Siberian Husky. However, each parent would still need to carry the recessive all-white gene. In each litter of puppies bred this way only 25% have a chance of being white. This is why it is harder to produce a white Husky from two Siberian Huskies that don’t have all-white fur. 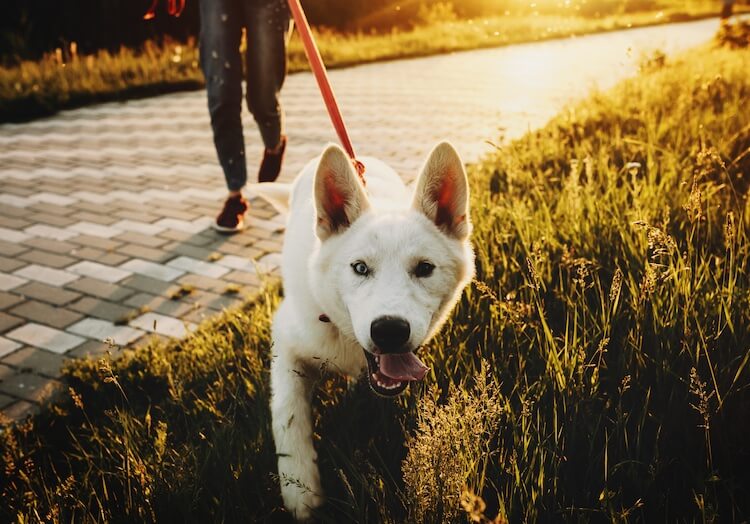 White Huskies are one of the most gorgeous and majestic breeds. Their beautiful fluffy white coat and dazzling ice-blue eyes enchant those who see them. Blue eyes are common in Huskies, but they can also have brown eyes or two eyes of different colors.

Like all Huskies they have a wolf-like appearance, triangular ears, almond shaped eyes and a bushy foxlike tail. While their bodies are bred for power, these dogs move with a charming poise and grace.

All Huskies are bred in standard or miniature size.

A standard white Husky can weigh between 35 and 60 pounds, and males usually weigh more than the females by about 10 pounds. Males will grow to be about 21 to 23.5 inches while females will be 20 to 22 inches tall. These dogs are a little bit smaller and leaner when compared to Alaskan Malamutes.

Miniature Huskies can weigh between 20 and 35 pounds and can grow to be between 13 and 17 inches tall.

The white Husky’s coat is double-layered, which evolved to help it survive the arctic weather conditions in Siberia. The top layer is dense and water-repellent, while underneath, there is a thinner, spikier coat.

Their coat helps them stay warm during the frigid arctic winters and reflects the sunbeams during the day so that they don’t absorb much heat in the summer.

A purebred white Husky must have an all white coat. Siberian Huskies that are white with another color are not considered purebred. These Huskies are not accepted by the American Kennel Club because a second color is not allowed in the breed standard.

The coat of a Husky can be a single solid color or patterned with two or three colors.

It is possible to have a white Husky with black, red, agouti, sable, gray, brown, merle or brindle in their coat.

White Huskies are very healthy and can live for between 12 to 14 years. However, they can inherit some genetic conditions associated with their white coat.

The most common health condition that affects the white Husky is deafness. The recessive gene that produces all-white fur can also cause deafness.

All Siberian Huskies are prone to developing hip dysplasia. While hip dysplasia is a condition that affects all Huskies, the chances of them getting it is only less than 5%. A veterinarian can also do hip evaluations to ensure that a puppy is healthy.

White Huskies are loving fur balls of endless energy. There is nothing they like doing more than running around. They love running around and chasing small animals, but they are not protective or aggressive towards strangers. Huskies are not guard dogs so you can trust that they won’t be scaring away any relatives when they come to visit.

Instead, they are incredibly friendly and love people. They will likely want to snuggle more with your friends than chase them away.

They are also very playful and gentle which is what makes them so great for kids. Older children can keep up with the energy of the white Husky and tire it during playtime, but small children do need supervision since Huskies can be clumsy.

White Huskies are also highly curious, loyal, and social. They are incredibly social because of their pack instinct. They thrive being around other people and dogs so it is important to always give them the affection they need.

Like all Siberian Huskies, it is the combination of high energy, gentleness, friendliness, and playfulness that makes them such beloved dogs. The white Husky shares all of these loveable personality traits.

Huskies rarely bark, but they do howl. This is how it communicates with other dogs.

If left alone for too long at home, then it will become bored and start howling for hours without end. Bored Huskies can also be very destructive. Since they need so much attention, they are prone to developing depression and separation anxiety.

The ideal home will be one where someone can stay with them most of the day.

How Much Are All White Huskies? 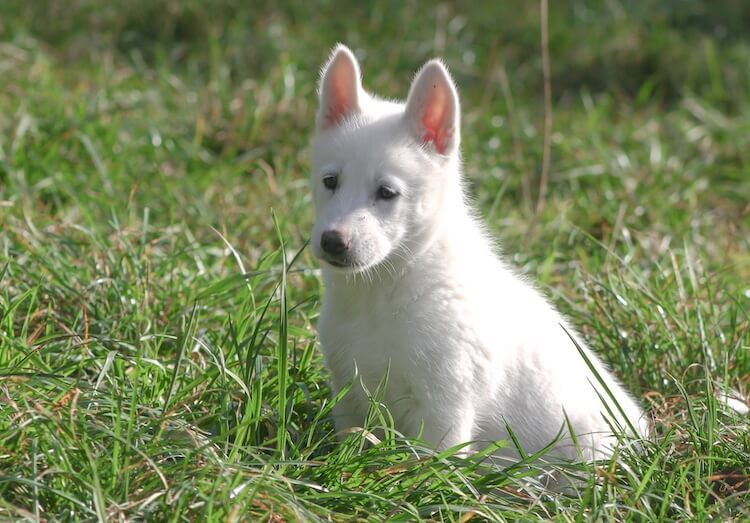 When buying a white Husky puppy, it is important to do your research to make sure that the breeder is reputable. They should be able to provide all the paperwork on the health and genetic tests of the parents.

White Husky puppies are rarer to find than any other Husky, but they are not more expensive.

Some breeders who have mixed Huskies like the Pomsky may charge more. The quality of the breeder can also affect how much you will pay. Reputable breeders tend to charge more because they take the steps to ethically breed puppies and register them with a Kennel Club. They also have the puppies’ parents tested for genetic diseases.

Miniature white Huskies are a bit more expensive because there is a higher demand for them, and they are harder to breed. They can run up to around $1,200.

The cheapest option is to adopt a white Husky from a shelter. But since this dog is so rare, it might be hard to find one in a shelter, especially a puppy.

White Husky puppies need as much care as any Siberian Husky puppy. It is important to feed your puppy four times a day until it is 12 weeks old. At around 12 weeks the amount of food fed can be reduced to three times a day.

Your puppy should be fed high-quality kibble with good quality sources of protein like chicken, meat, and fish. Not only will the right food allow your puppy to grow properly, but it will also help it maintain healthy skin and its all-white coat.

Once you have your puppy at home, you should start training and socializing immediately.

Huskies can be a bit stubborn, and the white Husky is no different. You can teach your puppy to be well-behaved with positive-reinforcement dog training and consistency.

Puppies are very playful, so you need to play with them every day. These pups love to dig and chew. Giving it lots of toys will help prevent it from destroying everything in the house. A yard to let it run in will also help drain its high energy levels.

As one of the most loyal and loving dogs, your Husky puppy can develop separation anxiety if you leave it alone too long. If it doesn’t get enough attention, it will start howling.

White Siberian Huskies are born white due to a recessive gene from their parents. Both parents must have the recessive gene to produce white puppies. White is an accepted color by the American Kennel Club, but any Husky that has another color in their coat (e.g. Black and White or Red and White) is not considered purebred.

What makes the white Husky different from other types of Huskies are its majestic white coat and piercing icy blue eyes.

The white Husky is one of the most beautiful dogs in the world, but they are lots more than just beauty. It is a ball of energy, white as snow, that is sure to bring joy and excitement into your life.

They are the perfect balance between adventure and affection. It can be an invaluable companion during your next hiking trip or a sweet dog giving kisses to the whole family. It will make friends with all people and dogs.

Did you decide to bring home a Husky puppy? Take a look at our list of Husky names to help chose the perfect one! 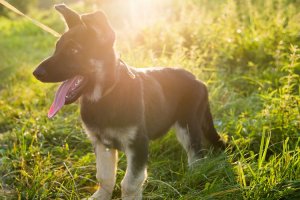 Miniature German Shepherd: Everything You Need To Know 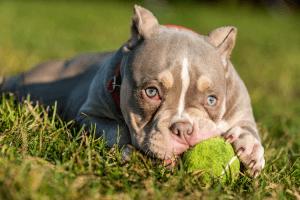